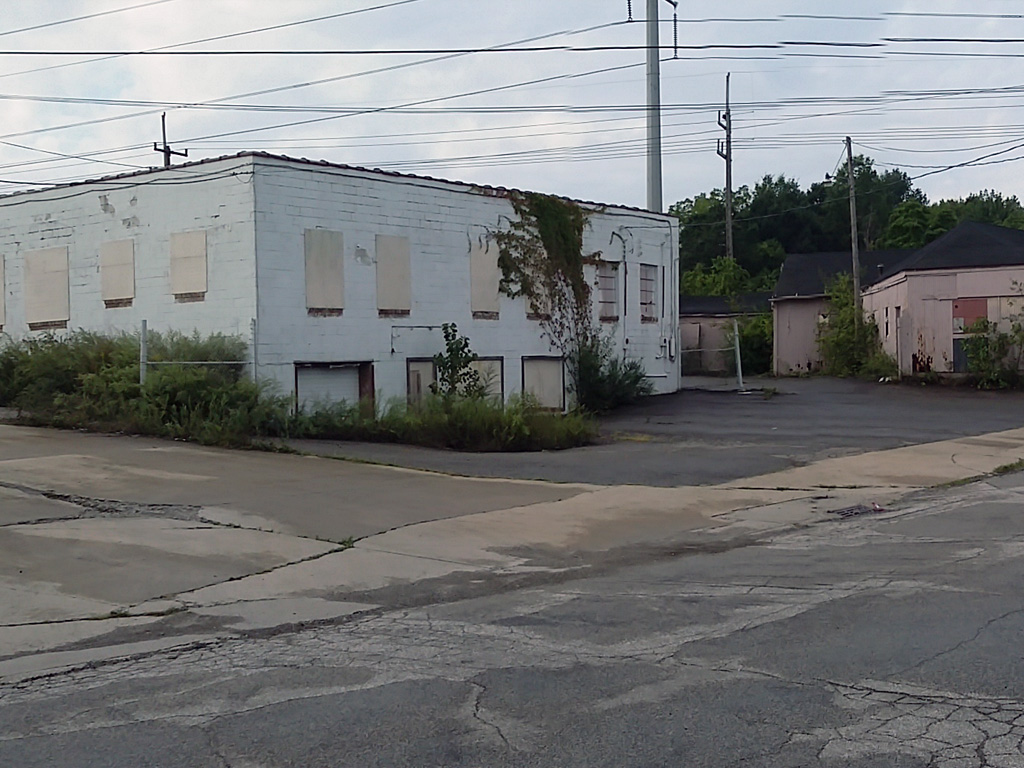 The Bedford Automile, home to the largest concentration of car dealerships in Ohio, is a big draw for the City of Bedford, with people traveling across the region each day to get a great deal on a new or used car.  When in 2015, a group of industrial warehouse structures situated around several car dealerships fell beyond general disrepair into unsafe conditions, the City of Bedford requested help from the Cuyahoga Land Bank in demolishing the structures.

“These dealerships are heavily invested in our community,” says Mike Mallis, Bedford’s City Manager.  “It’s important to ensure that we keep the surrounding area safe and clear of blight.”

The five interconnected buildings at 42 Harrison Street, totaling more than 24,000 square feet of space on 1.1 acres, sat vacant for years, were structurally unsound and full of code violations.  Collapsed roofing, broken and missing garage doors, wall openings and holes in fencing along the adjacent railroad tracks made the property difficult for the City of Bedford to secure.  The complex became a dumping ground for everything from tires to barrels of oil, mattresses and more.

“These buildings were a significant problem for the city,” says Mallis.  “The Cuyahoga Land Bank was instrumental in facilitating the environmental and demolition work necessary to secure the site.”

The assembly and condition of the buildings, along with the mix of chemicals, asbestos and solid waste left inside, made demolition very tricky.  “The Cuyahoga Land Bank worked closely with the City of Bedford’s building commissioner to strategize how to safely separate the property from an adjoining privately owned structure on Leonard Street,” says Jim Maher, Field Service Supervisor at the Cuyahoga Land Bank.  “There were many surprises along the way, but the demolition contractor (Independence Excavating, Inc.), handled the complications well.”

After months of preparation, demolition of the buildings took place in October 2016, and a new fence was installed along the railroad tracks to further secure the site.

“The City of Bedford has teamed up with the Cuyahoga Land Bank before, but this was the biggest project we partnered on to date,” says Mallis.  “We are extremely pleased with the outcome.”

The land cleared by demolition was quickly sold and put to productive economic use for new car sales by the Ganley Auto Group.  “Working with the City of Bedford and the Cuyahoga Land Bank on this project, as well as the end result, was great,” says Rick Heller, General Manager of the Ganley Chrysler, Dodge, Jeep, Ram dealership.  “We have added lighting and are displaying vehicles on the property, and are exploring further development of the site.”

Sharing a cool video of our latest renovation! T