Rebuilding a Neighborhood, One House at a Time 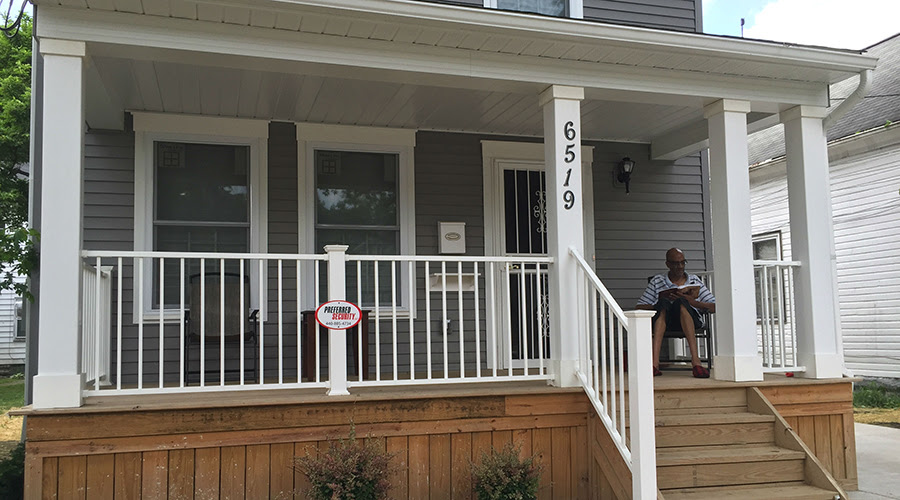 Rebuilding a Neighborhood, One House at a Time

In the Slavic Village neighborhood of Cleveland, Ohio, you can still see the scars of the foreclosure crisis — vacant houses with sagging porches and broken windows, empty lots where houses once stood and a still-thriving demolition business tearing down abandoned homes.

The neighborhood, named for its historic population of Central European immigrants, became a target for subprime and predatory loans in the 1990s and 2000s. When those loans went bad, “the zip code 44105 in 2007 had the highest foreclosure rate in the entire United States,” said Tony Brancatelli, who represents the larger Broadway-Slavic Village neighborhood on the Cleveland city council. “We were losing about two houses a day to foreclosure.”

Today, there’s another sight popping up in Slavic Village: brand new houses, with white trim and wood porches, all built by the nonprofit developer CHN Housing Partners. I found Charles Collier listening to music on his front porch, enjoying a breezy afternoon. He and his wife moved in earlier this year to be close to their daughter, another CHN client. “My wife always wanted a brand-new house, so here it is,” he said.

The couple rent the 3-bedroom house from CHN for $640 a month. After 15 years, they’ll have an option to buy it. “You’ve got 15 years to have the house to get it to kind of the way you want it, make sure everything’s good, so  yeah, it’s actually a good deal,” Collier said. “As long as the lord lets me stay, I’m going to be right here.”

Collier’s is one of nine CHN houses on a block once dotted with abandoned homes. In all, 37 are planned for the compact neighborhood. It’s just one of many revitalization efforts underway in Slavic Village, but it can make a big difference, Brancatelli said. The new homes bring people to the neighborhood, “sending their kids to local schools, spending at the local restaurants, going to the local grocery store and being part of the community,” he said. “You start seeing confidence being built in a neighborhood.”

CHN is working with cities like Detroit and Baltimore on similar programs. Formerly called Cleveland Housing Network, the group has been around since 1981. Back then, as now, banks weren’t lending to people with low incomes, said assistant director Kate Monter Durban. “So we were really created to try to figure out that dilemma, about how can homeownership be successful and affordable for low-income families,” she said.

Then in 1987 Congress created the Low Income Housing Tax Credit, to encourage developers to build affordable rental housing. CHN took advantage of the credit to start a lease-to-purchase program. Properties built or rehabbed using the tax credit have to remain rental housing for 15 years. In year 16 CHN offers renters the option to buy, at below-market rates. Buyers also get up to $10,000 knocked off the price for the rent they’ve paid. “What’s really different about our model is that we’re able to sell the homes at a very low amount,” Monter Durban said. A typical CHN home costs $25,000 or less. According to Realtor.com, the median sale price in Broadway-Slavic Village is about $43,000.

To be eligible for the lease purchase program, applicants need to earn enough to afford the rent but still qualify as low-income. Along the way CHN offers financial counseling to help people improve their credit scores, settle old debts and start saving. “Not only does it help them prepare for homeownership, but for the first time, maybe, they actually have a financial advisor helping them think about their finances and think about their future,” Monter Durban said.  When it’s time to buy they should be in good shape to apply for a traditional mortgage or get a loan from CHN. Over 30 years, 85 to 90 percent of CHN’s renters have become homeowners, she said — about 1,150 families so far.

Carinna Clay and Curtis Wright are just months away from paying off their loan. At ages 38 and 45, they’ll own their house on a quiet street in Slavic Village outright. “And it’s a nice property,” Clay said.  It has four bedrooms, two full baths and a large backyard surrounded by woods. When they moved in five years ago, Clay said, the house had only a few years left of the required 15-year rental period. “Then by the time it was up for sale, we were able to buy it,” she said. “I knew I had longevity on my job. I had decent credit and we just started from there.”

Clay is a security supervisor at a casino; Wright does maintenance for the city. Standing in their yard, Wright talked about his plans to replace a small trampoline with a bigger one for their six kids, and maybe add an inflatable bouncy house. “We’re going to hook it up,” he said. “A lot of different things for them back here once we get done.” It’s a big step up from the public housing project they left behind, where Wright said he constantly worried about his kids’ safety. “I’m going to say it: I was stressed out down there,” he said. “I had to get on anxiety pills.” And now? “Oh, tip-top shape,” he said. “Love it. I can’t believe it.”