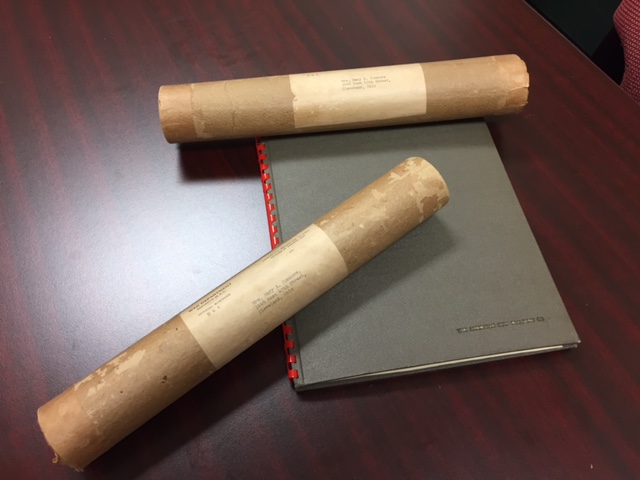 What seemed like a standard acquisition and “clean-out” recently by one of the Cuyahoga Land Bank’s trash clean-out contractors, was anything but routine.  While cleaning out the abandoned house on Cleveland’s near west side, Beneficial Properties’ owner Marvin Stover noticed two scrolls in a corner, neatly wrapped alongside a picture book and frame.

After spotting the insignia of the U.S. War Department on the documents, Stover carefully unfurled the scrolls.  Inside were two original Purple Heart certificates for two brothers who were soldiers and who were killed in action one month apart on June 20, 1944 and July 21, 1944.

The certificates, signed by President Franklin Roosevelt, honored the young men for their bravery and heroism. As incredible as this treasure was, the accompanying picture book held even more details of the extraordinary history of the men.  The photos captured a bittersweet ceremony involving Mary Connors, the mother of the two slain soldiers, dedicating the U.S.S. Towhee minesweeper on the Cuyahoga River where the minesweeper was built.

Officials of the United States military and others participated in the ceremony, which included statements from the shipbuilder.  Photographs of Mrs. Connors at the dedication site were emotionally powerful, not only because of the loss of her two sons, but because her husband, amidst their loss, participated in the manufacturing and building of the minesweeper.

The story does not end there.  Over 70 years had passed since the ship’s dedication, yet Cuyahoga Land Bank staff wondered whether it would be possible to locate the next-of-kin of Mary Connors.  Cuyahoga Land Bank researchers Jessica Masters and James McGuire began scouring the public record going all the way back to 1944.  The home where the Purple Heart documents were found amazingly had stayed in the family lineage through 2016.  Thereafter, the home became abandoned and was transferred to the Cuyahoga Land Bank.

After researching the “Connors” name, it was discovered that Charles F. Connors, the next-of-kin great-grandson of Mary Connors, currently lives in Westlake, Ohio!  Soon after visiting the Cuyahoga Land Bank offices with his uncle, Charles Connors verified the connection to the Connors family and the Cuyahoga Land Bank held a ceremony where Cuyahoga Land Bank President Gus Frangos presented the Connors family legatees the original Purple Heart documents. The ceremony was captured by NewsChannel 5 reporter Ron Regan.  After receiving the documents, Chuck Connors was both emotional and gratified to know that these records were preserved and now back in the hands of the family.