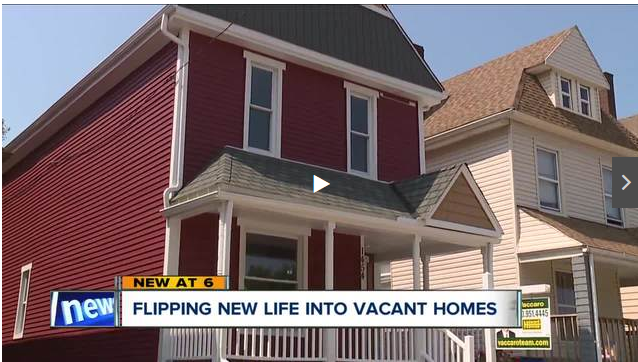 Community development corporations in Cleveland are buying up vacant homes and flipping them to pump more money into the neighborhoods they serve.

The organization purchases the vacant homes from the Cuyahoga County Land Bank for under $5,000, according to executive director Steve Lorenz, then pours money into improvements.

The Chatfield home, which was renovated top-to-bottom, took about 70 days to rehab. Lorenz says they put about $90,000 worth of improvements into the home and will list it for sale through a realtor in several days. The homes are meant for owners, not for investors.

Lorenz says none of it would be possible without the Land Bank.

“It does a great job of eliminating all the liens and so forth, so they come to us with a clean title,” Lorenz explained. “From there, we go to the bank, get a mortgage, and put the improvements in place.”

The money made from selling the homes goes toward neighborhood improvements, Lorenz says.

For resident Marlena Slone, “it’s a great thing.” The move abolishes vacant homes, which can often be an eyesore.

Kamm’s Corner is not alone. Many of the community development corporations in Cleveland do the same buy-and-flip, a trend that has taken off over the last several years.

The Detroit-Shoreway Community Development Organization leads the way, according to the Cuyahoga County Land Bank, having purchased 122 homes so far. Instead of rehabbing themselves, DSCDO sells the homes to developers or owner-occupiers to renovate.

Live in Glenville and next door to @UniversityCirc