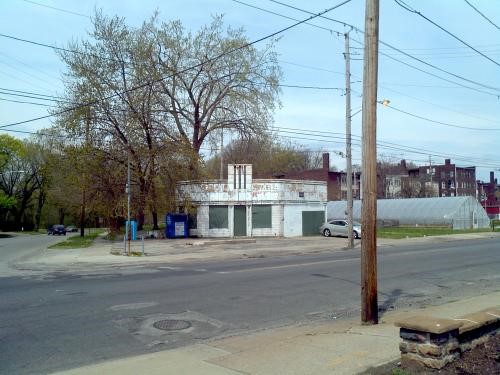 July 2015 – The Cuyahoga Land Bank acquired via tax foreclosure a long-shuttered gas station on the corner of E. 105th and Ashbury in Cleveland’s Glenville neighborhood. The parcel was among those being assembled for the extraordinary Greater Cleveland Fisher House project, a “home away from home” for families of patients receiving medical care at the Louis Stokes Cleveland VA Medical Center and other area medical centers to be built across the street from the site.

The Cuyahoga Land Bank conducted Phase I (November 2016) and Phase II (First Quarter 2017) assessments on the property to determine the extent of contamination at the site using a small portion ($19,500) of the EPA grant. The studies found four underground storage tanks, contaminated soils, and asbestos in the small building.

December 2017 – The Cuyahoga Land Bank was awarded nearly $100,000 in funding from OSDA’s Abandoned Gas Station Cleanup Grant, which was used for the removal of the tanks, remediation of the soils at the site, and further testing and assessment.

June 2018 – Using its own operating funds, the Cuyahoga Land Bank demolished the gas station structure and cleared the site including contaminated soils.  Remediation and testing continued through the fall 2018.

January 2019 – The cleaned parcel was transferred and is currently being developed by the City of Cleveland as a public plaza/greenspace as an enhancement to the Finch Group’s new Glenville CircleNorth mixed-use development project which includes 63 market-rate apartments.

“This project pulled together funding from federal, state and local agencies to enhance two fabulous projects and put an abandoned, environmentally contaminated site back into productive use,” says Kim Steigerwald, Acquisitions Manager at the Cuyahoga Land Bank.